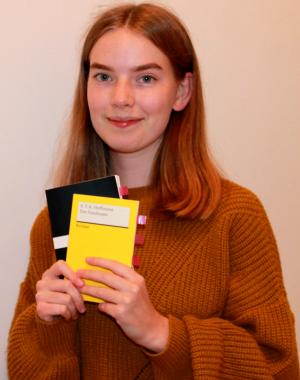 Year 13 student Rebecca Scholefield has been awarded First Prize by the judges of the German Classic Essay Writing Competition, run by All Souls College at Oxford University, for Sixth Form students.  The nationwide annual competition is in its third year and aims to stimulate interest in great German writers and influential literary works in German. This year the set text was Der Sandmann by E.T.A Hoffman (1816), one of the most captivating short stories in German literature and a masterpiece of Gothic fiction. There were 55 entries to the competition and Rebecca trumped them all to take the prestigious first place, above students from various private schools, and intends to study German at university.

Rebecca’s reading of this dark tale focused on the enigmatic nature of the central narrative, questioning the reality of events and characters. The concluding line of her winning essay reads: 'Perhaps we might look at the opposing perspectives in Der Sandmann not as mutually exclusive, but rather as a sign of the subjectivity of reality: if one believes something is real, it may as well be.'

The judges commented: “It was a pleasure to read this beautifully written, clear, well-structured, and well-researched essay. The author’s sensitivity to the details of conflicting narrative perspectives and our position as readers of Hoffmann’s story contributed to a nuanced interpretation of Der Sandmann as a whole.”

Oxford research fellow Dr Karolina Watroba said: “We were very impressed by the overall quality of all the essays: they were generally as good – and in many cases better than! – the work our first-year undergraduates produce. This kind of dedication and passion is exactly what we and other universities are looking for in candidates for a Modern Languages degree.”

The prize-giving ceremony will take place in Oxford on June 23rd where Rebecca will receive her certificate and the prize of £500. Highsted is incredibly proud of Rebecca’s achievement, a highly deserved result.