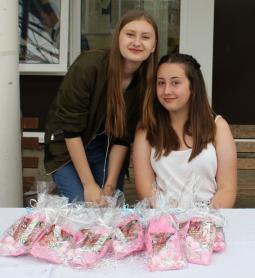 Highsted’s annual Citizenship and Enterprise Week kicked off with a bang this morning. Students of all year groups were keen to get started with their activities and have fun. Year 10 began by furiously decorating their market stalls under the canopy, cooking their produce in the kitchens and some took to the school car park to begin washing cars. By break time they were ready to start their business enterprise projects and interact with student customers. As well as the huge range of food and drink on offer – from sushi to milkshakes – some students were running miniature funfairs with games such as: Soak the Student, Lucky Dip and Hook the Duck.

As for the rest of the school, Years 7, 8, 9 and 12 were working together discovering a range of new skills and interacting with different students. Highlights of the day were most definitely: the completion of two enormous blue planting boxes for the Vegetable Patch outside T block; the excellent Bhangra Beats dancing (choreographed entirely by Year 12 Citizenship Team Leaders); watching and analysing ‘Glitter Force’ during Discovering Japan (an anime series about girls who save the world using make-up); and seeing the beautiful and highly creative mosaic totem poles painstakingly being created piece by piece slowly taking shape.

Other activities involved creative writing workshops where girls were inspired by a multimedia presentation of the geography and fauna of small tropical islands and were beginning to draft a variety of written responses such as: poetry, narrative description, novel extracts and play scripts on the theme of being ‘Shipwrecked’. The History and French departments were also working collaboratively today creating a re-enactment of the Storming of the Bastille ‘Horrible Histories’ style with a range of intriguing props such as: a guillotine, axes, muskets, cobwebs, a giant beard and a papier maché severed head.

It was another successful day for Highsted’s Citizenship and Enterprise Week today. Year 10 continued their business enterprise projects and provided a range of food, drink and other products for sale. Popular stalls have included the ‘Guess the name of the Unicorn’ and the milkshake stall, that always had a large queue of students throughout the day. One creative group have been designing and making personalised ‘word clouds’ on the purchaser’s choice of topic and there was even the chance to buy decorative photo frames for them.

Years 7, 8, 9 and 12 continued to work hard and perfect their creations and performances and the historical re-enactment of the ‘Storming of the Bastille’ was finally filmed, complete with elaborate costumes of: Louis XVI, grizzled sore-covered prisoners and Marie Antoinette with her ladies in waiting – all complete with 17th century style hairstyles. A special mention has to go to Annabelle B who helped translate a lot of the French dialogue and was right at the front lines with ‘Vive la Revolution’ goading her fellow prisoners on to victory.

Other highlights of the day included: model boat presentations in ‘Shipwrecked’ – designed around a creative writing workshop where students had to imagine the style and appearance of their boat depending on how it fitted into their stories and rocket test flights as part of the ‘Discovering Rockets’ activity – where students had to design, build and then fly their own rockets.  Students involved in Project Runway have also been hard at work perfecting their clothes and have started to practice their ‘runway walks’ for tomorrow’s Showcase Fashion Show.

Most impressive of all was the transformation of the Drama Studio, ready for tomorrow’s Showcase Performance. The once grey classroom has now morphed into: a shadowy forest, complete with trailing leaves and branches; with a tall bricked tower, including a window from which Rapunzel can let down her hair; and a huge spinning wheel, ready to prick the finger of an unsuspecting Sleeping Beauty.

Click here to go to our Citizenship & Enterprise Photo Gallery.