Our Week of Political Engagement

At our school, we believe it is important to raise awareness among students and staff alike about significant external events – particularly those of a political nature. As we approached the UK’s third General Election in five years, we felt it necessary to invite students of all ages to get involved in the democratic process - even if they were unable to vote at the time. 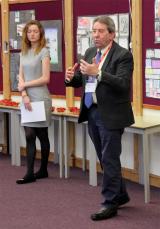 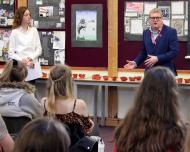 Three candidates standing for election in our constituency were invited to participate in lunchtime sessions to provide insight into their personal views on issues pertinent to our local area. Candidates were individually challenged on their proposed solutions and able to express the extent to which they agreed with their Party’s policies. Our school welcomed Gordon Henderson (Conservative) on Monday, Clive Johnson (Labour) on Tuesday and Ben Martin (Liberal Democrat) on Wednesday to discuss, with those interested, their intentions if they were to be elected as MP.

Pupils and teachers were all provided with the opportunity to explore the key concerns of election candidates; those such as poverty, housing, education, Brexit and damage to the environment. Although structured questions were prepared to help direct the events, audience members could interject with additional questions – this stimulated debate and allowed for passion to shine through.

Although some pupils were initially apprehensive to ask speakers of positions such as former MP or Councillor what they thought about the struggles of local constituents, it was clear that there was great development in confidence and political awareness as the week proceeded – this was assisted by the simultaneous Mock General Elections, held to coincide with the official voting on 12 December.

Highsted’s Mock General Election was student-led but with guidance from Sixth Form Politics students who worked with School Council members to promote the messages of the Conservative Party, the Labour Party, the Brexit Party, the Green Party, and the Liberal Democrat Party. By creating boards with policy information on key issues relevant to the electorate (after looking at the 2019 Ipsos Mori Issues Index) they were able to help inform their peers about promises made and the beliefs of five political parties in the UK. Students were selected at random to represent the various political parties across the three days before the Election on Thursday, so as to expand their knowledge of all manifestos and to encourage students to understand the perspectives of others, even if they are different from their own. 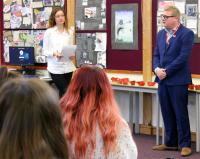 Overall, feedback from teachers and pupils was incredibly positive. Groups of individuals were soon coming together to initiate political discussion and build up the courage to question claims made by candidates. One other prominent result of this week’s guest visits and student-led campaigns that the outstanding capabilities within the student body were highlighted; their conduct, politeness and intellect were impressive to our guest speakers and teachers. Whether students were canvassing as part of mock election campaigns, asking candidates relevant questions or actively paying attention to the assertions in each party’s manifesto, it is evident that the cooperation and diligence within our Highsted community are what make events such as these so successful.