“The School Council is a central part of having your say as a student. We are not only a voice within our school but we also seek to influence the wider community for the benefit of other young people. I am proud to be a member at this exciting time!” 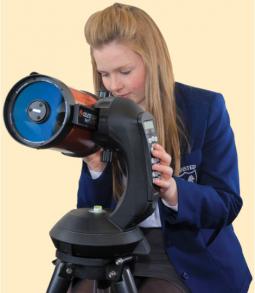 Highsted has always belonged to its students, students who strive to lead and make a difference within their community. It is no surprise, therefore, that the School Council is both a popular and vital element of our student voice provision at Highsted, with Council records dating back as far as 1947! 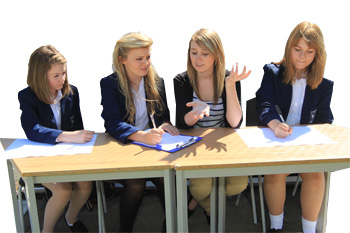 Every student is given the opportunity to air their views on any aspect of school life through their elected house Councillors. At present, 16 Councillors representing every year group and every house, meet on a weekly basis to debate issues raised by their peers and work actively to create solutions to any problems arising.

The Council itself is an entirely student-led initiative that works mainly within Highsted, but also reaches out into the local community. By mirroring the staff-created concept of active learning groups, the School Council develop their qualities as young leaders by working towards a self-directed improvement plan – part of Highsted’s overall School Improvement Plan. Issues covered can be as wide-ranging as the redevelopment of school buildings, campaigns to promote equality within the community, or even developing a school radio station.

Every member of our Council is a dedicated young woman, ready to lead Highsted into an exciting future.

To find out more about who we are and what we do, email us at: studentcouncil@highsted.kent.sch.uk 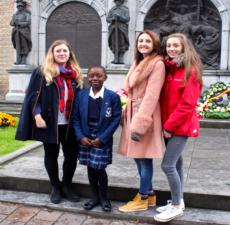 On Saturday 11 November, a small group of Highsted students and staff visited Ypres to commemorate the Armistice, along with representatives from other local secondary schools in Swale, Swale Borough Council and the Mayor and Mayoress. Mrs Lennox, School Council Leader and students Breanna Gumiro (Year 7), Mai Tumber (Head Girl) and Ella Thomas (Deputy Head Girl) visited the town of Ypres and participated in the Poppy Parade.

The Poppy Parade originated in the 1990s and is inspired by the famous poem by John McCrae In Flanders Fields, which was written close to Ypres in the spring of 1915. It has now become an annual tradition and gives members of the public the opportunity to take part in the memorial services. Everyone who participates is offered a Royal British Legion Poppy Petal and these are released from the roof of the Menin Gate. 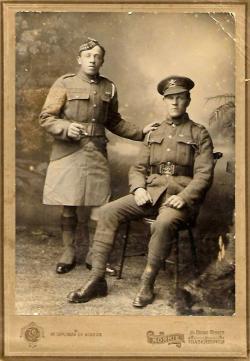 Andrew took part in a battle at Beaumont Hamell in November 1916 and managed to retain humour when recording events in his diary such as, ‘Jerry shelling reserve a wee bit’ and ‘good day’s sport firing RGs (rifle grenades) at hares’ while a lot of sniping was going on. On March 21 1918 he was taken prisoner and taken to Cassel PoW Camp. He ended up in Chemnitz, Saxony where he spent his time carting parcels. He mentions the prisoners playing football and tennis for entertainment and receiving occasional treats of half a teaspoon of jam and half a sausage per man.

Frederick joined the Royal Garrison Artillery on 3 March 1916 and trained in signalling and telephony. He sadly died on 7 January 1918 aged just 29, as a result of burns received while sleeping in a wood lined pill box. He had been manning a forward telephone exchange at Pheasant Farm. He is buried at Mendingham Cemetery.

Bruce emigrated to Canada but returned to England and enlisted on 23 September 1914.  He went to France on 1 May 1915 and died in No 11 Casualty Clearing Station on 14 November 1916 aged 24, from wounds received in action the previous day during the advance on the Ancre.  He is buried in Varennnes Military Cemetery.

Mrs Lennox, Breanna, Mai and Ella had a chance to visit some of the cemeteries near Ypres after the Armistice Day commemorations and reflect on the events of the day. All were incredibly moved by their experiences and the school appreciates their visit, honouring all who lost their lives. 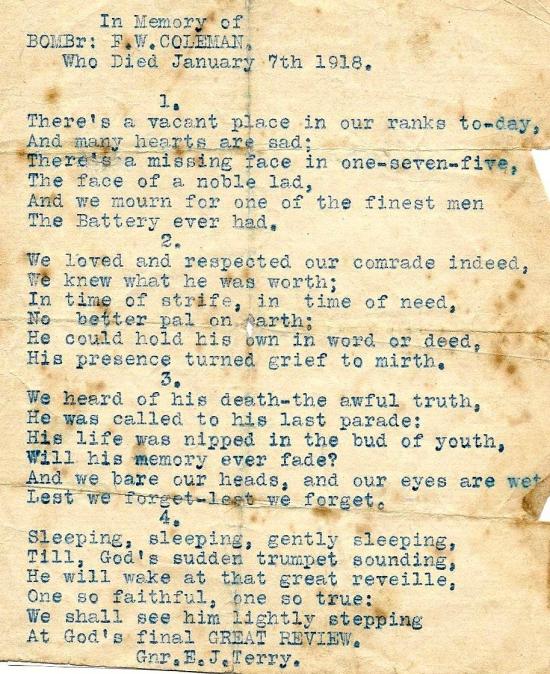 Highsted pupils were pleased to rise to the challenge when they discovered that the theme for their Harvest Boxes in this centenary year was ‘Heroes’, enabling them to commemorate heroes of WW1 among others.  As usual the generosity of the pupils, parents and friends was overwhelming, with the collected gifts being presented to the local charities: The Quays homeless hostel, Age UK, and the Salvation Army.   The gifts were presented in imaginatively-designed boxes made by the girls, and these were judged by Quays Team Leader Donna Lee and Salvation Army Major Robert Jepson, who is also one of the School Governors.  Major Jepson and Ms Lee took into account not just the relevance, attractiveness and presentation of the designs (and the generosity of the contents) but also how thought-provoking the boxes were in showing the engagement of the pupils with their themes. 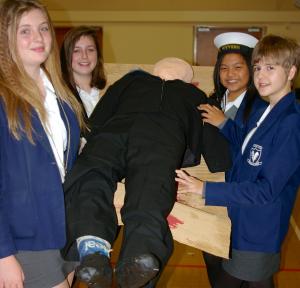 There were two winning designs. One was by a group from Eliot House who decorated their box both with photos that represented their own personal heroes and with poppies to symbolize the country’s heroes. Alongside the box, the girls carried a ‘wounded soldier’ on a stretcher to mark the sacrifice made by so many heroes fighting for liberty from oppression. Abbie Fallows (Year 9) said, “I have really enjoyed being a part of the Harvest Festival and being able to contribute my creative ideas to our box. We actually won the competition with our 'wounded soldier' and that was an amazing achievement. It was also great to know how much the activity has contributed and helped our local community.”

The other top-placed design, from Seacole House girls, also used poppies to represent real heroes, whilst they endorsed the selfless nature of such inspirational people with the example of the determined and resourceful (yet otherwise ‘ordinary’)  video game hero, Mario, in his quest to save Princess Peach. Variations on this theme - that every one of us has a hero inside - were also reflected in some of the other designs which scored highly, including one honouring the WW1 hero ‘Sergeant Stubby’ – an American army dog who was credited with helping to save many lives.

Highsted’s Citizenship Co-ordinator Mr Cloud Quinn, who organised the event, commented:  “We are very proud of the girls, who worked so hard on their designs and were so generous in their donations to the charities.  We have also arranged a visit to Ypres for a small group of students to experience for themselves the site where so many heroes played their part.”

Four years ago, the School Council started a process to achieve Fairtrade status.  Over this time, Highsted has utilised Fairtrade products at all of our events, including tea and coffee. We have also made an effort to teach and support Fairtrade as part of our curriculum, offering students a chance to become involved. Highsted is proud to announce that on the 5th February 2014, we were awarded our Fair Achiever status, which carries right through until 2017! We are extremely pleased that we have been awarded this honour and as a school, we will continue to support Fairtrade! 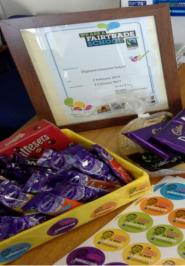 For the duration of Fairtrade Week (3rd-7th March), the School Council and Mrs Hill carried out a series of Fairtrade related fundraisers and events.  This was to celebrate our newly accredited Fair Achiever status and to continue raising awareness of the importance of supporting Fairtrade.  During morning registration, every form completed the Fairtrade 'Bananas and Brains' quiz, competing for the prized Fairtrade hamper - mainly consisting of chocolate treats! Throughout the week, other activities were run by the School Council and Miss Hill during lunchtimes, such as the selling of Fairtrade chocolate brownies; fruit skewers and milkshakes; a Banana Treasure Hunt and a Fairtrade chocolate relay race.  On Friday lunchtime, Miss Kelly presented the hamper to Mrs Burnett's form (F4) who came first.

Last year, the School Council raised an almighty £1028.66 to go towards funding for the construction of a new Multiple Sclerosis Therapy Centre based in Canterbury.  This fantastic amount was reached by holding many events, including a very successful non-school uniform day and cake sale. Together with earlier fundraising events and an impromptu collection following the House Drama Competition, the school has now contributed around £5000 to the project.

The appeal to build the new site was launched two years ago, with a target of £1.3 million in mind; Frank Brake, a local businessman generously agreed to match the final amount raised.

Sarah Franklin, the Head Girl, invited Mary Daly (an important supporter of the campaign) to Highsted, where she gave an assembly about MS and how the building project would aid people diagnosed with the illness. Recently, the final target was achieved and Miss Kelly, along with School Council members, Sarah Franklin, Nicola Cook and Hayley Watson were invited to watch the beginning of construction for the MS centre.

In conjunction with this, Highsted supported the Purple Rabbit Emporium which also raised money for the MS Centre by selling handmade Christmas decorations (made by Jacqueline Saffery, who is an MS sufferer herself and a friend of the school); these were on display in Reception.

Congratulations to the School Council for organising these events and thank you to everyone who aided the funding of this very worthy cause!