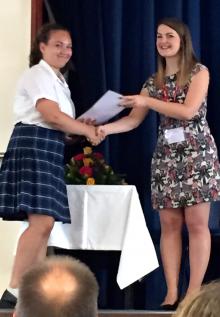 The Lower School Awards ceremony is a time for celebrating all of the hard work the students have put into this academic year. Students from Years 7, 8 and 9 received awards in areas such as attendance, attainment and progress, among others. There were also musical performances from Branwyn Henley-Ennels, who played a saxophone solo, and Ella Crunden, who played the guitar and sang.

The guest speaker this year was Miranda Black – a former Highsted student who left the school six years ago. She gained a first class honours degree from the Queen Mary University of London. She was the president of her Student Union at university and now works for a local council in London. She is passionate about mental health issues and has worked both at university and at the council to promote understanding of these issues.

The main theme of her talk was that our students should not be afraid to be different and should in fact embrace these differences, use them in their favour. She went on to say that standing out is a positive in the real world. It was a meaningful and heartfelt address and the students were inspired to be brave as they started to take the next steps in their lives.