The Drama Department were delighted to invite the well-reviewed theatre production company Splendid Productions to Highsted Grammar School on Friday 14 December, and we were certainly not disappointed. The afternoon began by inviting all GCSE and A-level Drama students to watch a reduced version of Aeschylus’s Classic Tale of Oresteia into an hour, performed by a cast of three female actors.

Splendid’s new creative adaptation explored a place where rage meets justice in an artful, political and entertaining piece of theatre magic! It was highly engaging and entertaining, whilst being intelligent and thought provoking for the students. It was wonderful to witness the audience completely focussed in the production responding from roaring laughter to stunned silence. The actors creatively aided us in our imagination in believing there was an array of characters on stage due to their inventive and skilfully executed performance skills. This was an opportunity for the students to be inspired and it was wonderful to see how creative the production company were in staging their production in the students’ learning space – no doubt the influence of this work will aid the students’ creativity in their future devised work. 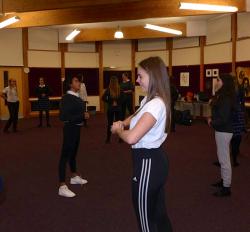 But it did not end there! Years 11-13 then took part in workshops hosted by the actors. This was followed by a practical experience for students to challenge their own performance skills and understanding, which the students grasped with both hands.

The event was a wonderful way for drama students to end the term and we will be looking out for this production company’s next production!